The stability of a freely floating ship

The PRS Research & Development Division developed theory of calculations of the GZ-curve for a freely floating vessel, available in the report.

The Ox'yz' system refers to a trimmed unit; it is defined by the PS and waterplane at an initial position. The Ox''y'z' system is rotated with respect to the Ox'yz' system around the axis Oz' by the angle of azimuth y. Both systems are fixed to the unit.

Calculations carried out for conventional ships show that the choice of the reference axis is meaningless. It has, however, some meaning for semi-submersible and jack-up platforms, due to a small ratio L/B, which entails a small difference between longitudinal and transverse stability. In the case of platforms with an initial heel it matters to which side the platform is inclined. If it is inclined in the direction of the initial heel, the GZ-curve exists at the entire range. If it is inclined in the opposite direction, in certain neighborhood of zero the GZ-curve is indefinite due to lack of longitudinal balance. This is due to the small ratio L/B, and more precisely, due to a small ratio of the principal moments of inertia of the waterplane in an upright position Jy/Jx. This problem does not occur on ships without an initial heel – GZ-curves are continuous on both sides.

In the range, where the GZ-curve is indefinite the unit is unstable with respect to the angle of twist, i.e., the ship can automatically rotate by 180° around the axis z', assuming a heel towards the initial heel, where the ship is stable (it has a positive longitudinal metacentric height) with respect twist. This instability relative to the angle of twist is unfavorable to the safety of the ship.

Sample GZ-curves for three ships and two jack-ups are shown below. 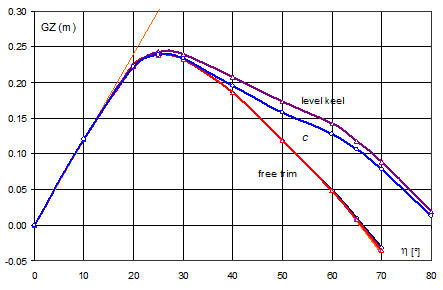 Fig. 2. GZ-curves for the cutter

Curve c in Fig. 2 concerns the constant trim, which occurs at the position of equilibrium. Fig. 4. GZ-curves for the barge

For units without an initial heel, the GZ-curves are anti-symmetric. 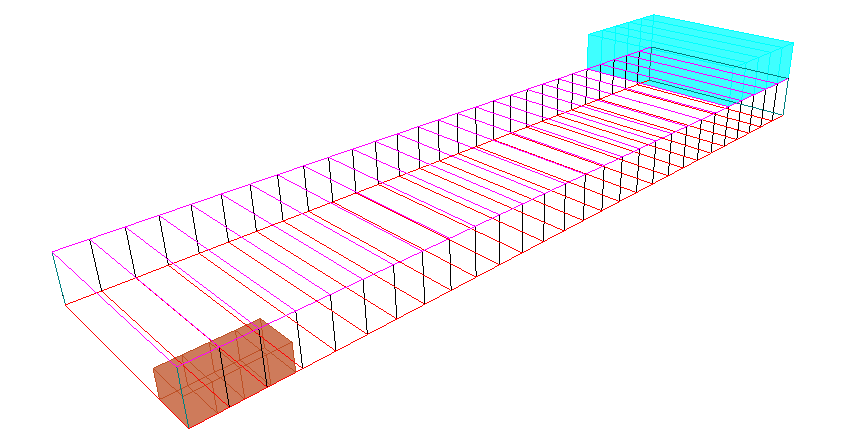 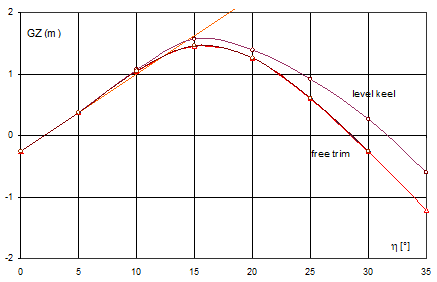 Fig. 6. GZ-curve for damaged barge for heels to starboard (in the direction of initial heel) 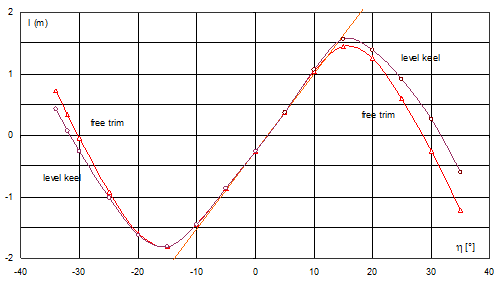 Fig. 7. GZ-curve for damaged barge for inclinations on both sides

For units with an initial heel, the GZ-curves on both sides are different. For the side opposite to the initial heel they are larger, wherein in a certain neighbourhood of zero the GZ-curve of minimum stability does not exist, due to the lack of longitudinal balance. In the case of conventional ships, the interval of discontinuity exists also, but is imperceptible, of the order of angular minutes. 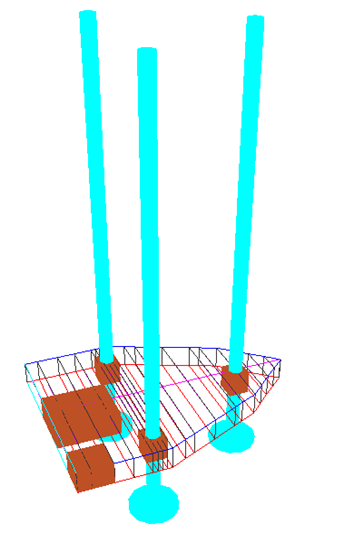 Fig. 9. GZ-curves for platform I inclined to starboard (in the direction of initial heel)

Curve c in Fig. 9 concerns the constant trim, as in the position of equilibrium. 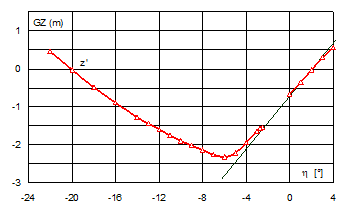 Fig. 10. GZ-curve of minimum stability for platform I inclined to portside

For inclinations to portside, at the range a’ Î á0, -2,5°ñ the GZ-curve does not exist. Outside this range the absolute values of the righting arms are larger, which is better seen in Fig. 12. On the plot summary (Fig. 11, Fig. 12) the discontinuity interval for the GZ-curve of minimum stability (curve z') is not well visible. 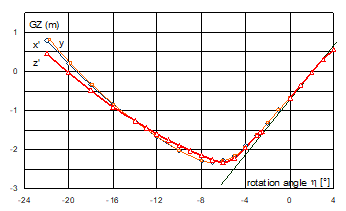 Fig. 11. GZ-curves for platform I inclined to portside

It is noteworthy that the GZ-curve for the reference axes x' and y almost coincide with each other. This happens in each case, which is well seen on the attached graphs. This comes from the fact the axes of rotation e for these curves are very close to each other. Both curves, however, do not differ much from the curve of minimum stability (curve z'). Fig. 12. GZ-curves for platform I for inclinations on both sides

Normally, for a given heel angle the longitudinal balance of the ship occurs at four twist angles (four azimuths), corresponding to transverse inclinations to portside and starboard as well as to longitudinal inclinations (trims) by bow and aft. For the first two twist angles minima of the dynamic arm occur, and for the other – maxima. Fig. 13. Run of stability characteristics of rig II in function of twist angle Y for a' = 2° 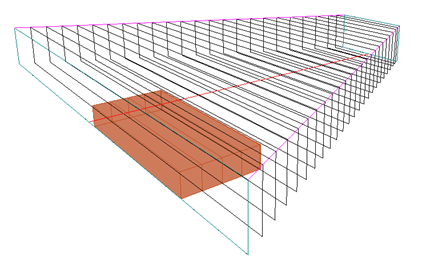 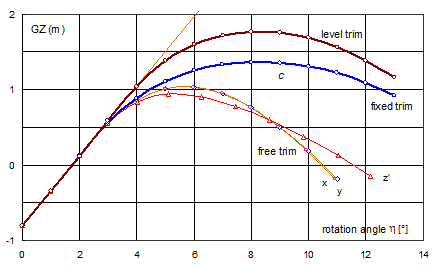 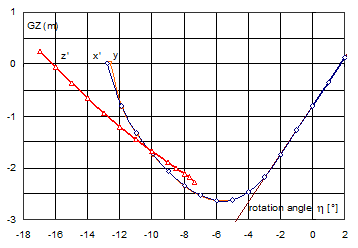 Fig. 17. GZ-curves for platform I for inclinations on both sides

Since the ratio L/Bmax for platform II is smaller than 1, the discontinuity interval for the curve of minimum stability (curve z') for inclinations to portside is markedly longer than in the previous case, equal to -7,4°, instead of -2,5°. In other words, for inclinations to portside, in the range a’ Î á0, -7,5°ñ the curve of minimum stability does not exist. In turn, for the reference axes Ox' and Oy the GZ-curve do not exist for heel angles below -13° (Fig. 16, Fig. 17). The said curves are not, however, the curves of minimum stability, though they have the same area between the angle of equilibrium and range of stability, as for the curve z'.

As before, in the range where the GZ-curve does not exist, there are only two zeros corresponding to the minimum and maximum of the dynamic arm ld (Fig. 18). Fig. 19. Run of righting arm l º GZ and dynamic ld for rig II in function of azimuth Y,
for a heel angle less than the critical

From Fig. 19 it follows In addition that for the heel angle a' = 6° the platform cannot be longitudinally balance, when the azimuth is from the range y Î á86°, 106°ñ.

A few further conclusions can be drawn from the above calculations:

For ships there is no revolution – any method of calculating the GZ-curve with free trim yields virtually the same curve. However, there is a revolutionary conclusion for platforms – there is only one GZ-curve related to the reference axis Oz'. In other words, for rigs GZ-curves for various azimuths do not exist, nonetheless the regulations require such calculations.